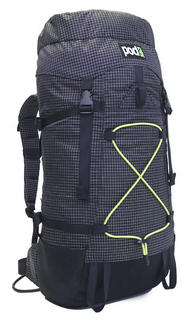 Podsacs, which has attained something of a cult status for its Black Ice backpack, has just introduced a stripped down version with enough ounces shaved to make a difference when the air gets thin. The new Thin Ice is made of Dyneema, a fabric more commonly spotted in slings, tapes and bulletproof jackets because of it’s strength-to-weight ratio.
They’ve also dropped the nice-to-haves like padding and back support to get the listed weight down to 990 grams (2.2 lbs), from 1.65 kg (3.6 lbs) for it’s big brother, the Black Ice. That’s not a lot for a bag with this capacity, especially considering smaller ultralight bags such as the Berghaus 64Zero are only a few hundred grams lighter and don’t have an easy way to strap on an ice axe or crampons. Whether you really need those is another question. My crampons live inside my bag where I’m not going to lose them and sometimes store my axe down between my pack and bag.
In cutting the trimming from the pack Pod is giving climbers what they need, not a shopping list of features that help sell sacks to the average punter but just add weight in the hills. So it’s not likely to get recommended by your average shop assistant and get a a very wide following outside the hardcore climbing community.
That, I suppose, may help cement it’s appeal among climbers.
This a pack with a fine lineage and it’s big brother has been given some great reviews over the years.
Needlesports calls the Black Ice ” Alpinetastic!”
The Pod Thin Ice should be in stores about now and will set you back about 120 pounds. It’s big brother sells for about 140 pounds.
More about Dyneema
If you’ve ever wondered what it is about Dyneema that makes it the fabric of choice for slings, and now packs.
Tote of Australia, which makes bulletproof vests out of this stuff, says its tenacity (ability to withstand being stretched before breaking – unless one of you engineering sorts out there tells me otherwise) is 15 times greater than steel.
Strngely enought it’s made of polyethylene , one of the cheapest and most commonly used plastics. You already own some in the tupperware you use to pack your sandwitches and another version is used to make shopping bags – but don’t go climbing with those! The difference between these typs of polyethylene and Dyneems is that normally the molecules aren’t properly lined up, so they can easily get ripped apart. In Dyneema, the molecules are all lined up and behave more like a crystal than like a jumble of spaghetti, making a fiber that is super strong for its weight.